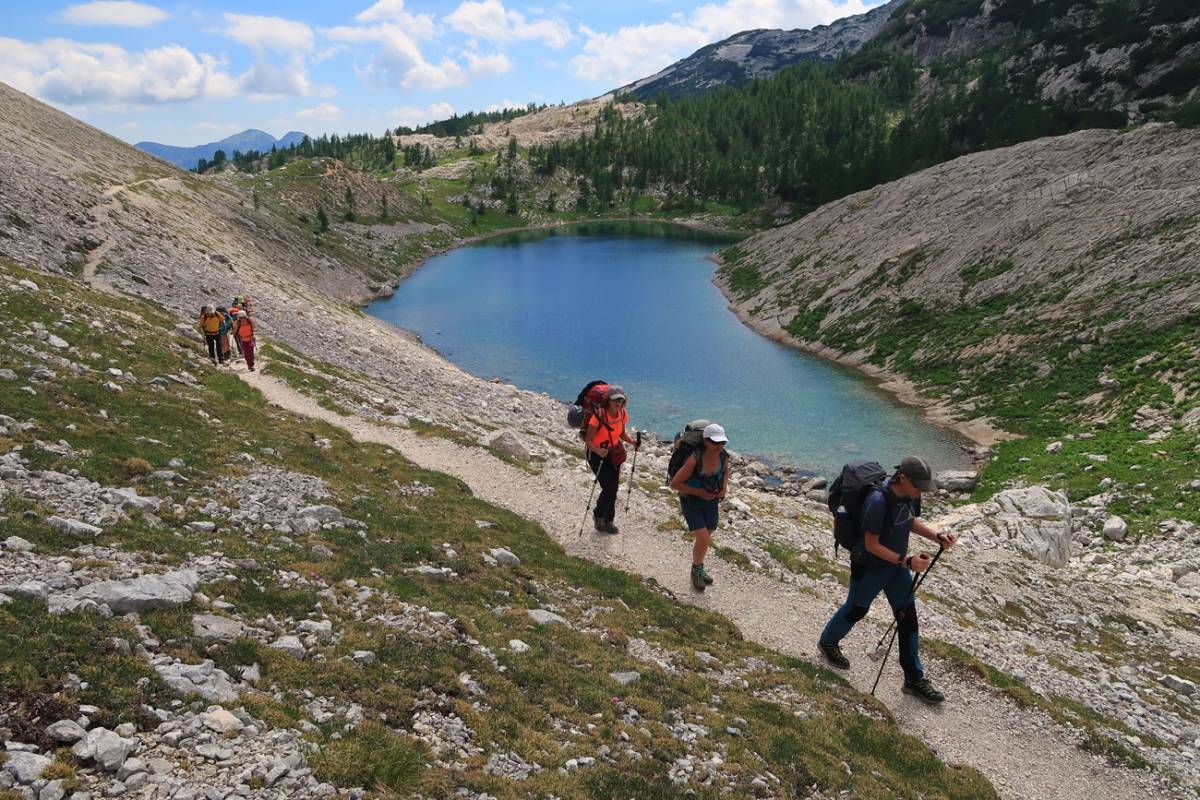 The days follow the beautiful Komna and the Valley of the Seven Lakes below or on Triglav. We walk in the heart of the Triglav National Park and combine natural beauty and the hiking soul.

Itinerary
Description
We start in the Soča Valley with an ascent to the Krn lookout point and end at the end of Bohinj on Planina Blato above Lake Bohinj. In the meantime, we cross quite a few meters of altitude, even on less crowded paths, and climb Triglav or just walk below it. Depends on what you choose. We sleep at Dom na Komni, Zasavska koča na Prehodavci and Vodnikov dom. The tours are adapted for two groups of hikers and differ on the 2nd and 3rd day. On the last day we will descend from Vodnikov dom to the Blato mountain.

Description
We start in the Soča Valley with an ascent to the Krn lookout point and end at the end of Bohinj on Planina Blato above Lake Bohinj. In the meantime, we cross quite a few meters of altitude, even on less crowded paths, and climb Triglav or just walk below it. Depends on what you choose. We sleep at Dom na Komni, Zasavska koča na Prehodavci and Vodnikov dom. The tours are adapted for two groups of hikers and differ on the 2nd and 3rd day. On the last day we will descend from Vodnikov dom to the Blato mountain.

DAY 1 ON THE TOPS OF THE ISAX FRONT

The path leads us from Planina Kuhinja to the beautiful viewing peak of Krn, on to the stump between Krn and Batognica 2058 m, and from there right along the ridge to the top. The ascent to Batognica is an ascent to the mountain of the sea during the Isonzo Front. The mountain was underground mined by the Austro-Hungarian army, and an Italian tunnel was also found because the Italians also wanted to mine the Austro-Hungarian positions, but the Austro-Hungarian soldiers overtook them and mined half the mountain. Even today, many craters are visible on this account. From Batognica we will descend to the Prehodci pass 1639 m, and from there a little lower to the old abandoned Italian caravans in the place behind Lepoče 1620 m, which served to control the border between the two world wars. The ascent to Bogatinski sedlo 1804 m follows, where the border between Italy and the then Kingdom of Yugoslavia ran between 1920 and 1945. At the end, there is a folded descent along the mule track to Dom na Komni 1520 m.

This day we will be surprised by the beauties of the longest high mountain valley of the Julian Alps, the valley where the Triglav National Park was declared in 1961. Due to its geological and biodiversity, the Alpine Protection Park was declared here in 1934, which was the basis for today’s TNP. The trail from Dom na Komni gradually climbs along the route of the Triglav ski highway to the mountain on Kal, and from there it slowly descends into the Lopučniška valley 1550 m. Follow the ascent to the hut by the Triglav lakes. Even before we reach the hut, the first view of the 5th and 6th – double Triglav lake awaits us.

We continue along the valley of 7 lakes, where in the middle of the valley is the 4th lake – Ledvička, which is also the largest. Before the ascent to Zasavska koča na Prehodavci 2071m, we look at the 3rd lake – Zeleno jezero and the 2nd lake – Rjavo jezero.

DAY 3: ACCORDING TO THE MULLATIER PASSING THE FORMER DESTROYED ITALIAN CARAVLE ON TRIGLAV

Both groups are heading towards Hribarice. The first group continues to Kanjavec, which is admired in winter as the longest Slovenian ski tour, and the second group to the top of Hribarice to Dolič. The path from the hut winds along the former Italian mulatto, which led to the Vitorria Emanuelle barracks, which began operations after the First World War. Today, unfortunately, only the foundations are still visible. The path to Triglav branches off to the right and leads us to a height of 2550 m, where the secured climbing path begins. Only this one leads us to the Triglav gorge, from which the path on the right side of the southern ridge leads to the top of Triglav 2864 m. At the top, with a clear and clean atmosphere, the view opens all the way to the Slovenian sea. The descent follows the classic path, which descends along the ridge to Mali Triglav 2725 m, where the fork in the path is the home of Planika 2401 m. From Planika there is an even easier descent to Vodnikov dom 1817 m. Here the first and second groups are obtained.

DAY 4: ACROSS THE BOHINJ MOUNTAINS TO LAKE BOHINJ

From the hut we descend to Velo polje 1680 m, which is known for grazing livestock and where cheese and dairy products are produced between the beginning of July and the end of August. From there, the path leads us to Jezerski preval, where on the right side of the pass there are peaks with interesting names Adam and Eva, both higher than 2000 m. Followed by a descent to the mountain Krstenica 1645 m, which also operates in the period from early July to late August. From the mountain there is another descent to the mountain Blato 1150 m, where transport awaits us.

Equipment
Suitable for the first group are mountaineering clothing and footwear and the recommended helmet, backpack, additional equipment suggested by the guide for a 4-day hike. The second group is suitable mountaineering clothing and footwear for 4 days (helmet, climbing harness, self-protection kit) – in case you decide for the second group, where the ascent to Triglav.

Price
The price is 220 €.
The price includes: rental of technical equipment (belt, helmet, self-protection kit), transport from the starting point, ie Mojstrana and back, organization and management, and costs of guides.

The price does NOT include: accommodation and all other food and drinks and other costs related to the tour.
For the cost of an overnight stay, we suggest redeeming your state-sponsored vouchers.

You need around € 50 a day to sleep, eat and drink at the cottage. Keep cash with you due to the general non-functioning of the cards at the huts.
The supplement for a guided ascent with a mountain guide to Triglav is € 100 per person, in the case of at least 3 people.
In the case of 4 people, the price is 20% higher.
In case of 3 people the tour is canceled.
Number of participants
Min. 5 in max. 10 people.