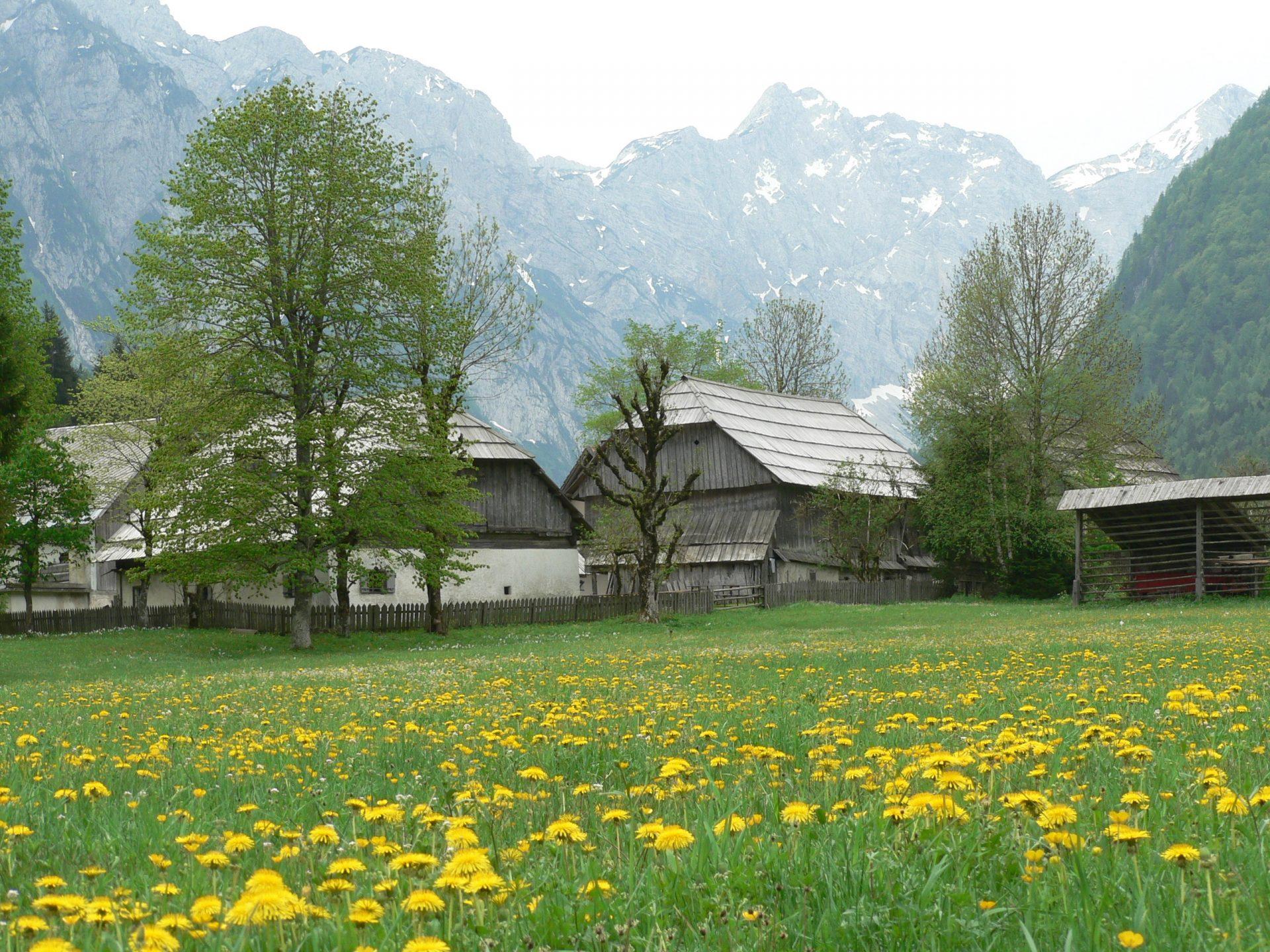 The name Radovna is used for a settlement, creek and 20 km long valley.

Depart from the parking lot in front of the Slovenian Alpine Museum.  Continue in the direction of the Vrata valley and take a left turn towards a complex of apartment buildings in approximately 300 m. Pass by the apartment buildings and cross the green bridge on the left, which crosses the Triglavska Bistrica river. Next, ascend up the macadam into the forest until you reach the tennis courts in the Mlačca valley. Pass by and lightly ascend the macadam until you reach the main road that leads into the Radovna valley. Take a right turn 800 m from the starting point. Ascend the asphalt road until you reach the Kosmač pass (there is a turning for the Kot valley on the right). This is the highest point of our tour, 845 m – 3.15 km. Start descending from the pass and take a left turn at the crossroads towards Bled (Zgornja Radovna) – 3.45 km. Descend down the steep slope into Zgornja Radovna. The asphalt road passes by the Psnak restaurant, and turns into a macadam in approximately 50 meters. Take a left turn at the next crossroads, where there is a signpost for the Gogala linden tree – 4.4 km.Follow the asphalt road until you reach the second congregation of houses in Zgornja Radovna. At the Gogala Farm grows the Gogala linden tree, which is estimated to be 800 years old – 5.2 km. From here, the macadam leads to a crossroads with the main road, which leads to Bled. At the crossroads, take a left turn – 6.00 km. All the while, we slowly descend. Pass by the Psnak Sawmill and Mill and continue towards Lake Kreda, 9.0 km – 675 m.

On the left, there is a wooden footbridge that takes us across the Radovna river. Follow the macadam with the lake on our left side. The road leads along the lake, converging with the main road near the Burned-Down Radovna Memorial – 10.0 km. We follow this road to the Krnica village. Cross the large bridge on the right, which crosses the Radovna river – 16.5 km. Ascend to the main road and take a left turn toward Bled at the crossroads – 17.0 km. In Zgornje Gorje, by the church in the middle of the village, take a left turn – 18.1 km (signpost for Višelnica-Mevkuž). Asend lightly and descend once again to reach the crossroads in Spodnje Gorje, where we take a left turn toward Jesenice – 19.0 km.

From here, ascend up the main road, which leads to Jesenice. Once you reach the Kočna village (the second highest point of our tour, 672 m), descend down the steep road toward Jesenice. At the end of the descent, pass below the railway overpass and the highway, continuing until you reach the crossroads beside the bridge that crosses the Sava Dolinka river. Here, take a left turn towards Podmežakla – 26.3 km. Follow the road that leads through the village, passing by the Podmežakla sports hall on the left, until you reach the highway underpass and converge with the cycling trail – 29.5 km. The cycling trail runs along the highway, passes the Karavanke plateau and continues toward Mojstrana. At the Sava bridge, the cycling trail converges with the main road. Take a left turn and follow the road. Pass by the ski slopes to reach Mojstrana. At the info-point, cross the bridge (beneath it runs the Triglavska Bistrica river) and take a left turn once you reach the main crossroads, carrying on in the direction of the Vrata valley. After 500 m, you will have reached the Slovenian Alpine Museum – 38.7 km.